Protection of an endangered grasshopper in the MacKenzie Basin has been given a boost with the transfer of a key habitat into conservation land.

Yesterday Land Information and Conservation Minister Eugenie Sage announced a 440ha section known as the “Tekapo Triangle” in the Mackenzie Basin will be transferred to the Department of Conservation to protect a population of the highly endangered Brachaspis robustus otherwise known as the Robust Grasshopper.

This news has been welcomed by Environment Canterbury who has funded robust grasshopper research and protection projects based around the “Tekapo Triangle” since 2015.

The robust grasshopper is nationally endangered, found only on riverbeds and river terraces in the Tekapo, Pukaki and Ohau catchments. It has the same threat classification as kea, two species of kiwi and the hoiho. It is more threatened than four other kiwi species, the hihi, whio and North Island kōkako.

Despite being a “grasshopper”, it can’t fly and is a poor jumper, so largely survives by camouflaging into its stony habitat. While it has the ability to survive in sub-zero temperatures in the winter, this endangered species is under threat from pests such as hedgehogs, rats, and stoats.

Initial trends showed most populations were declining, and there were no effective tools for their recovery. 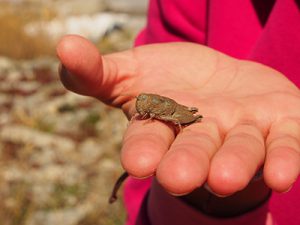 Through its Regional Braided River Initiative Fund, Environment Canterbury has allocated a total of $43,000 since 2015 to University of Canterbury and Department of Conservation researchers, allowing them to move forward with research into threats, monitoring methods and ecological management of the robust grasshopper.

University of Canterbury (UC) entomologist Dr Tara Murray said the initial $29,000 provided by Environment Canterbury allowed her to begin the translocation research and secure additional funding for her work.

“Environment Canterbury’s ongoing support of our robust grasshopper research has been great. It’s allowed our team at Canterbury University to make real progress in providing the knowledge and tools DOC needs to protect this, and hopefully other, insects in these braided river habitats that haven’t otherwise received much attention,” Dr Murray said. 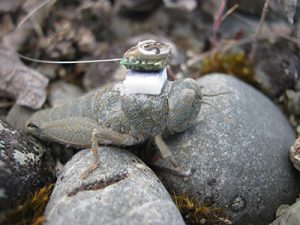 One of the early initiatives to take place as part of the research was the first experimental translocation of a threatened grasshopper in New Zealand.

186 grasshoppers were moved to the Twizel Kaki aviary complex where six gravel beds mimicking a river bed had been created, three inside and three outside an existing predator fence. This allowed researchers to develop a method for successful grasshopper translocation and identify factors that might limit grasshopper population recovery which is already influencing decisions around future management of the species.

The second phase of the project, currently underway, aims to establish at least one grasshopper population that is protected from predators and roll out a new method of monitoring the grasshoppers.

Dr Murray said the research around and protection of robust grasshoppers could have benefits to other insect species.

In addition to this work, Canterbury University is conducting research into other ways of helping the native grasshopper.

This included researching a more accurate means of tracking population changes in response to threats or management actions, and testing other methods of tracking the grasshoppers’ movements in the wild- including attaching transmitters to 20 grasshoppers- to see how they are using their habitat and how large an area they need, Dr Murray said.